The national park Tiveden is a little treasure for photography. The sceneries are often quite complex with many trees, rocks, hilly areas and small lakes. This time I focused on wide-angle shooting to be able to capture the terrain and the forest at the same time. I also like the special light in the national parks, mostly due to the clean air, varying terrain and moist climate in the autumn.

If you view the photograph, the scene might not look too steep, but it was a rather dangerous route to get to the right position for shooting. I was lucky it had not rained the night before. All paths and rocks are too slippery after a heavy rainfall. 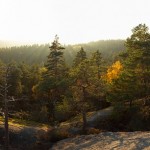